Washington, DC is a sea of blue for the thirteenth year in a row. Colorectal cancer advocates from all over the country are currently attending the 13th annual Call-On Congress, which is Fight Colorectal Cancer’s largest annual advocacy event.

The event unites 150 advocates who will attend congressional meetings to represent everyone who has been affected by colorectal cancer. Attendees will learn about treatments, research, and policy making. 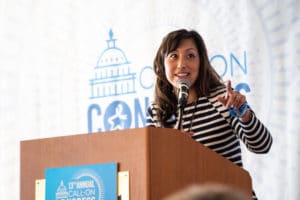 During Davis’ welcome, actor and Fight CRC advocate Luke Perry was remembered for his tireless activism and contributions to the community. Also honored were 5-year and 10-year Call-On Congress veteran attendees.

After being introduced to the Fight CRC staff and Grassroots Action Committee (GAC), advocates were ready for the first panel, led by Timothy Cannon, MD. Cannon is an associate professor at Virginia Commonwealth University and Clinical Director of the Inova Schaf Institute Molecular Tumor Board.

Cannon was followed by Fight CRC’s Director of Health Promotion, Andi Dwyer. Dwyer updated advocates with the progress made in addressing Early-Age Onset (EAO) colorectal cancer during an EAO meeting in Feb. 2019.

Stand Up to Cancer’s Advocacy and Strategic Collaborations Specialist, Frederick Johnson, BCPA, introduced the organization’s Clinical Trial Finder. The mission of the finder, Johnson said, is to reach multicultural communities affected by cancer and reaching them via bilingual materials and public service announcements. 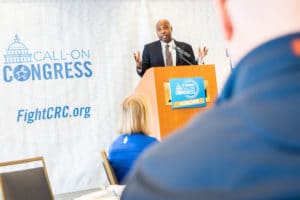 A significant topic in colorectal cancer is the microbiome, and its importance was broken down by Cindy Sears, MD. Sears is a professor at John Hopkins University and a 2018 Fight CRC Immunotherapy Research Grant Awardee.

The microbiome may be a feature that contributes to early-age onset cases, informed Sears.

After a break, advocates shared their stories at their state tables. It was an opportunity to get to know each other better and hear why they’re attending Call-on Congress. Sharing stories reached a higher scale later on when everyone in the room stood up individually and shared a bit about themselves to the entire room. 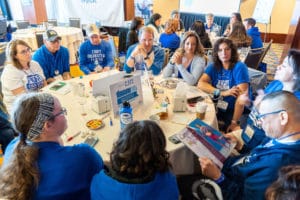 Advocates then proceeded to attend the breakout sessions, which are smaller and more intimate panels. The sessions included topics such as:

To wrap up the day, a dinner was held for all the attendees. The dinner also served as an award ceremony, in which innovative advocates were honored. The Community Award was given in memory of Chris Ganser, who passed away last year. Ganser was an active advocate in the Colorectal Cancer community, was a GAC member, and helped launch Climb for a Cure.

Advocate Chad Schrack, who walked across the country raising awareness under the Cancer Stroll moniker, was given a special award for his tireless activism throughout the years.

The emotional and information-packed day ended on a light and fun note, with Fight CRC staff and GAC members playing a friendly game of CRC-themed Family Feud. 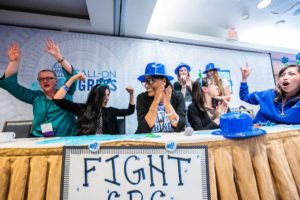