However, this year -- in many ways -- is unlike any other. In February 2020, Fight CRC President, Anjee Davis, was diagnosed with breast cancer.

We're celebrating her this month, along with others in our community who have also faced a breast cancer diagnosis, and raising awareness of the connection between breast cancer and CRC.

According to a meta-analysis published in Gastrointestinal Endoscopy, women diagnosed with breast cancer before age 50 were twice as likely to receive a diagnosis of CRC than their older counterparts.

On February 4, 2020, Anjee was diagnosed with early-stage breast cancer. This diagnosis has only deepened her commitment to the fight against cancer. She is living her best life, embracing being "flat and fabulous."

An Unexpected Change in Plans

The year 2020 was going to be my year. I had been planning a celebration for 20 years of marriage on July 20 for all of 2019. My blissful self-centeredness was redirected when I found a lump on my left breast on January 7 while taking an extra-long hot shower, and thinking, 'This is going to be an amazing year!' The coming weeks proved to be challenging. And yet looking back, out of the bad came a lot of good.

Going into surgery I had no idea how I would recover from breast cancer. We didn’t know my stage, so we didn’t know if I would need chemo or radiation. We were flying blind but hoping and praying for the best. Ultimately diagnosed stage IA, doctors removed four lymph nodes, two cancerous lesions, and four additional ones they hadn’t expected. No chemo, no radiation, and no reconstruction. I had a preventative surgery to remove my ovaries and am taking letrozole for the next five years.

Remember Who's In Charge

The biggest thing I learned is that as a patient you don’t have to be patient when dealing with saving your life. Listen to your instincts. Be brave enough to know you can pick who is taking care of you. If a healthcare provider or clinic doesn’t feel right, it probably isn’t. Read the reviews on your doctors. Ask your friends and the nurses who they recommend and why. Know that you aren’t stuck, ask questions, get second opinions, and don’t let momentum take over.

It's been six months since my breast cancer diagnosis. Cancer didn’t rob me of my joy, femininity, motherhood, laughter, or who I am. Rather my joy is deeper (and I laugh even louder 😂) as I celebrate being cancer free. This twist in fate has been oddly liberating. I know who I am. I know what I value. I know that I am loved. That is powerful and healing – beyond the scars and beyond my bout with cancer.

"Check your lady lumps! 40% of breast cancers are first detected by women who feel a lump. Doing a breast self-exam is super important; it could save your life. I know it saved mine!"

Trisha Lannon is an avid colorectal cancer advocate, former member of the Grassroots Action Committee, and was featured in the Colon Club's Colondar.

On April 14, 2009, I got a call I was not expecting. A biopsy that had been done on my left breast four days earlier had come back positive for breast cancer – specifically DCIS stage 0 grade 3. To say that I fell apart is an understatement. This was the second cancer I had been diagnosed with in two years. 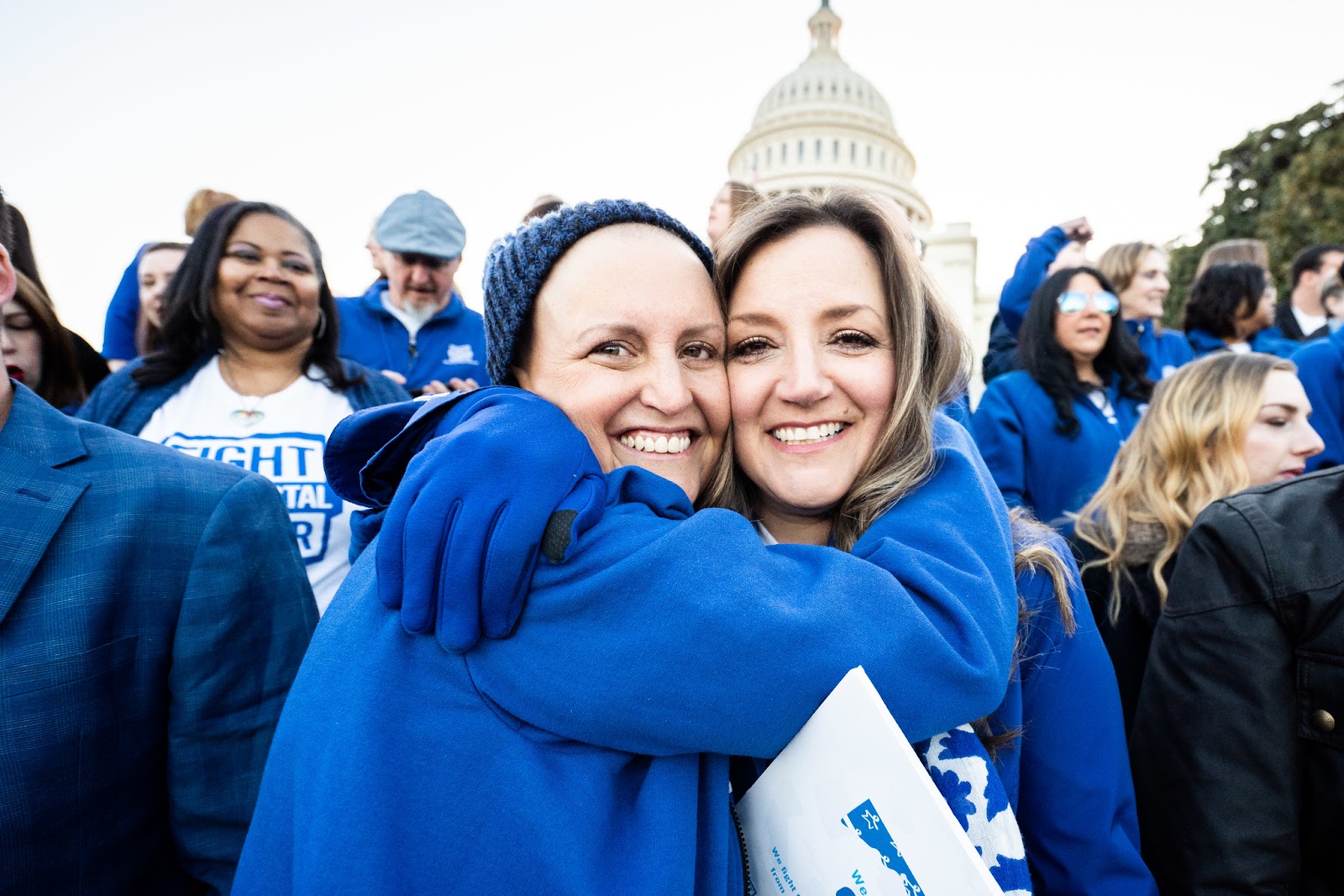 No Evidence of Disease...or So She Thought

I had been NED (no evidence of disease) for 16 months after facing stage IIIc colon cancer when I got the call that I had breast cancer. I was assured it was not my colon cancer coming back and spreading, but a totally separate cancer. Due to the number of areas in my left breast that had linear calcifications, my surgeon told me I needed a mastectomy of my left breast. I then met with my oncologist who laid out all of the statistics for me, which led me to make the decision to have a double mastectomy. I did not want to find myself in this situation again five or 10 years later. A lot of people were shocked by my decision to remove my right breast, which was healthy, but it was my body, my fight.

On May 15, 2009, I had a double mastectomy and began the reconstruction process. My surgeon placed tissue expanders under my chest muscles that she filled every week until I was at the right size. After three months, I had another surgery to get my silicone breast implants. The reconstruction process was long! I was not prepared for it to take over a year. I was also not prepared for the painful process of the tissue expanders. Due to the pain and pressure from them, I actually had to sleep in our family room on the sectional couch propped up to an almost sitting position to keep the tissue expanders from pushing on my back anymore than they already were. There were two more surgeries after that to finish the reconstruction process and then the tattoo process to give the illusion of having areolas. Since I was stage 0 and my sentinel nodes came back clean, I did not need chemo.

Two cancers in two years. Two! No family history of colon cancer or breast cancer. That is, until my mother was diagnosed with stage II breast cancer at the age of 68, just two years after my own diagnosis. My younger sister, my mother and I have all tested negative for BRCA 1 & 2. Nothing points to genetics at all. I guess sometimes cancer is like a game of Russian Roulette.

Karis is 65 years old and a survivor of four different cancers. She was featured in the Colon Club's Colondar.

I love to hike and be outdoors. Every time I climb a mountain and reach the summit, I am teary-eyed with joy. Sometimes I even shout or do a little dance.

It all Started with a Mammogram

Because there was breast cancer in my family, I had my first mammogram at age 36. That turned out to be a smart move. I was diagnosed with stage II cancer in my right breast and underwent a lumpectomy, radiation, and chemo.

But that was only the beginning. When I was 44, I experienced sudden and severe pain in my belly. Stage II colon cancer! There was surgery (18 inches of colon removed) and the notorious Leucovorin/5FU regimen. This was shocking. No one in my family ever had any colon troubles. And it was really rough. I lost 40 pounds. Once I was so skinny and weak, I missed a chemo treatment.

Then life got really crazy. At age 47, ovarian cancer struck. I was lucky again, as it was stage II. More surgery, more chemo. When I was 50, the ovarian cancer came back, but chemo beat it back into remission.

The Role of Genetic Testing

By that time, there was genetic testing, and I found out that I had the BRCA-1 mutation, which greatly increases the risk of breast and ovarian cancer. Researchers think there may be a link to colon cancer too, but it’s not really understood yet.

Unbelievably, there’s more. At age 54, an MRI showed that I had a new Stage II cancer in that same breast. This time the breast was removed and I did chemo for a fifth time. When I was 56, I had the healthy left breast removed to prevent more cancer. I did not have reconstruction.

Two years ago, my 86-year-old mother was diagnosed with rectal cancer and tested positive for BRCA-1. After chemo and radiation, Mom is feeling good too. She plays golf once a week.

Taking it One Step at a Time

Sure, I get scared about cancer. I don’t know what’s going to happen next. Nobody does. But I just keep moving. I spend as much time outdoors as I can. I do the things I love to do. I keep going up those mountains, one step at a time.

Are You a Breast Cancer Survivor?

If you're a breast cancer survivor, we celebrate you. And we honor those who've lost their lives to this disease.

To celebrate and raise awareness this month, encourage your friends and family members to get a mammogram if they haven't already...and while they're at it, go in for that colonoscopy, too!