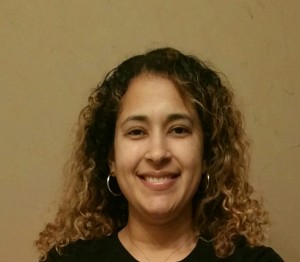 Hi, my name is Ivette Moya. I live in Pembroke Pines, Florida. I was 30 years old in February 2012 when this unbearable pain started on my lower left abdomen. I dealt with it about 8 days until I could barely walk. My husband took me to the hospital I usually went to and was told that I had a small ruptured ovarian cyst and I was impacted. They sent me home with Vicodin that didn't help, without flushing me, without a CT scan. They told me to see my GYN on my next visit. Two days later the pain was still there so I saw my GYN.  She did a test and couldn't explain why I still had that pain. Since the first hospital checked me and basically told me that I was okay, and my GYN also saw me and saw that I was okay, I assumed whatever I had would go away on its own, or so I thought. I went to work the next day, a Wednesday, dragging my body the entire day and almost crying through it all (that would be my last day for 8 months)!  The very next day, my body stopped digesting food. I went back to the same hospital and my doctor took away medicine and gave me new medicine, to no avail. I stopped eating altogether. I threw up a lot the next couple of days and was very weak. I have a very high tolerance for pain and I tend to be hard-headed sometimes. On Saturday night, March 10, my husband wasn't having it, so he took me to his preferred hospital, Mt. Sinai in Miami Beach, where they did a CT scan and found inflammation in my colon - they asked if they could admit me to run more tests, of course we said yes. None of the pain medications helped! A sigmoidoscopy was done and they found a tumor! It felt like immediately following the sigmoidoscopy, there were 4 doctors walking in, all looking downcast, and one of them (my oncologist now, Dr. Mike Cusnir, whom I love) telling me: "Mrs. Moya, you probably have cancer, probably have FAP and probably need to have your entire colon removed." I remember looking between him and my husband and thinking how crazy all this sounded and telling him that there is no cancer on either side of my family. Frankly, I thought that he and all of the doctors were crazy. I cried long and hard twice in the moments after the news and then I gave everything to God! The pain that would not go away, even with pain medications, was an abscess that had been growing...as soon as they put a catheter in to remove the abscess, the relief was unexplainable! By that time, I didn't think I'd live much longer. My body had been through way too much and I didn't think I had the strength to keep fighting. In the following weeks, we met my surgeon, Dr. Henry Lujan, of Jackson South, who's amazing. It was confirmed that I did have stage II cancer, I did have FAP (colon full of polyps...my stomach is also full of polyps) and my colon had to be removed in its entirety, including my rectum. Everything Mt. Sinai said was absolutely correct. I had a total colectomy with ileostomy on April 25, 2012. I had the reversal of the ileostomy on June 12, 2012!  After the surgery I was cancer free and didn't need any chemo at the time. The pain I felt after those two surgeries were unlike anything I'd ever felt before. My family was strong for me; I tried to be strong for them. I have to admit that after I recovered, I broke down because I suffered, but not as much as my loved ones suffered for me and that hurt me so much. My husband would tell me that I was crying for the wrong reasons because we pulled through as a family, and we did! In February 2013, a PET scan showed I had numerous tumors and only a biopsy could determine if they were cancerous or not. They were only able to test the one by my stomach and determined that all the tumors were desmoid tumors. These tumors are rare and aggressive, only 2-4 in a million people a year get these, and I had 3 appear at the same time. Having FAP puts me at a higher risk of getting them and any and all future surgeries puts me at a higher risk of getting more of them returning. I've been on chemo twice for them: the first time (August 2013- May 2014) was through the port (Navelbine), once a week for 9 months and now I've been on Gleevec pills daily (on/off when I'm not well) since May. I've been extremely symptomatic this entire year, it seems. I'm in a lot of pain as the tumors have moved/shifted and are now pressing on my stomach, on my bladder and the one next to that one is hitting nerves causing pain to shoot down my legs.  My walking has drastically changed. The other ones cause extreme pain in my abdomen and other areas. I lose my appetite often and get nauseous. For 2 years we've been told that these tumors cannot be removed because they're in a very dangerous area (the mesentery section) and all I have is my small intestine, but 2 weeks ago we met a gynecologist who has removed these tumors before and says he can remove mine. He also told me that I actually have 4 tumors instead of 3.  I'm a little nervous, but excited at seeing what God will do next in our life.

What One Million Strong means to Ivette

It's incredible to know that so many people suffer from colon cancer and it's not just the patient, it's their loved ones. I suffered, yes, but my family suffered and still suffers more. The flesh is only temporary, but their wounds will last a lifetime and that kills me even though they care for me with all the love they have. It's also incredible that so many are united in this battle; that's amazing! No one has to suffer alone or wonder if anyone else understands what they're going through! I hope I got that right!

No matter what darkness you're in right now, even if you think you won't pull through, keep fighting with everything you've got please. More... Share your story! Read other One Million Strong Stories! Sign up for the latest Fight CRC news!