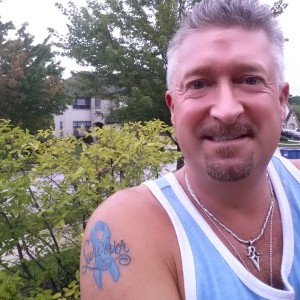 At age 40, after being diagnosed as anemic, I was diagnosed with stage IV colon cancer.

After my colonoscopy, I was devastated with the results. I had a minefield of thousands of polyps. Most were precancerous and quite large. I also had several other spots of concern in my colon and rectum.

I had a colectomy and was scheduled for a follow-up colonoscopy in four months.

When my check-up came around, I had my second colonoscopy. Once again, thousands of precancerous polyps were in the remainder of my colon and rectum. Another minefield.

I was told that to save my life, I would need to receive chemotherapy and remove the remainder of my colon and rectum. I was given 2-4 months to live due to the aggressiveness of my cancer.

I had my total proctocolectomy after that diagnosis. I knew that to live, I  had to live with an ileostomy. I was diagnosed with FAP which explained the aggressive polyp growth.

I had 36+ rounds  of chemotherapy after the big 11-hour surgery. I had a total of five recurrences in all – it had spread to my liver, duodenum, bile and pancreatic duct area, stomach, adrenal gland and gallbladder.

I have had seven surgeries in all. The mass was removed in my duodenum and bile duct area during a separate surgery at the Mayo Clinic in Rochester, Minn. I had my gallbladder removed and two liver rejections. They removed wedges of each liver lobe. This surgery lasted 12 hours and I had post-surgical complications that nearly took my life.

I had drain tubes put in my liver for 10 weeks where the abscesses grew and where the parts of my liver were removed. I was going into kidney failure and was almost in need of kidney dialysis.

This fight was the hardest thing I’ve ever had to go through, and to this day, I don’t know how I made it through it all. On several occasions, I wanted to give up because of the pain and being so ill from chemotherapy.

I am truly a walking miracle.

It just goes to show how fast your life can change and how cancer can take hold of you so abruptly. I DID NOT let it get the best of me. I am a hero, a fighter, a survivor and to put it in simple terms, I kicked colon cancer’s ass. But by no means easily!

I am now a proud advocate for Fight CRC, the Colon Club and Stupid Cancer. I am proud to have been selected as a model for the 2016 Colondar. I want to help as many as I can by inspiring those currently in the fight.

What does One Million Strong mean to you?

It means everything to me. I am one of the One Million Strong. I’m here to help the other million currently fighting in any way I can – whether it’s by phone, text, email or social media.

It means everything to me to spread awareness. In 2015, I had my proclamation request signed by the governor of Illinois Bruce Rauner declaring March as Colorectal Cancer Awareness Month, which proudly hangs on my wall. I’ll continue to request my state’s proclamation each and every year.

I am going to Call-on Congress in March of 2016 to be heard and make a difference.

What is one piece of advice for others in the fight?

Never give up – no matter how hard it is.

You are here for a purpose and you need all of the positivity and strength you have to keep fighting. You can beat it! I did! Share your story and get the word out there to get screened. It will save your life or someone else’s. I saved two of my brothers’ lives by getting them to get their colonoscopy after my diagnosis.

You’re not alone and you will NEVER fight alone.

If you’ve been impacted by colorectal cancer, we need you! Join us and use your experience, your story and your voice to create real change. Get started by signing up. Next, see all the ways you can do something about this disease and take steps to get connected with our community. Last, share YOUR story!

Come fight with us.