Marsha Baker is a Fight CRC advocate and member of the Grassroots Action Committee. She lost her father to colon cancer.

This March will mark ten years since I attended my first Call-on Congress with my two sisters. It had been just nine months since losing our dad to stage IV colon cancer; we were still struggling with tremendous grief and it showed. Nevertheless, we were determined to find a way to continue to fight in the name of Steve Baker. 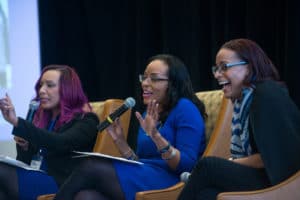 We were beyond nervous for those first meetings on Capitol Hill; we had spent the night before preparing by writing actual scripts. Of course, it was hard, and we were emotional but we did it. We shared our story with each of our Senators and Representatives.

We used our voices. I was quoted then saying, “It was the best grief counseling that I had received.” That feeling of empowerment knowing that we were making a difference was irreplaceable. To be honest, I was still quite angry and needed to take action. The fire had been lit.

We took our advocacy efforts back home to Oregon and so it began. We started a nonprofit organization in our dad’s name and shared our story throughout the state including community events and health fairs, local businesses, and churches, along with multiple fundraising and media campaigns.

We took everything we had learned at our first Call-on Congress and applied it at home. We were committed to saving other families from a loss by a preventable disease by telling our own very personal, painful story. Over the course of six years, we were able to make an impact on Oregon screening rates which translates into lives saved.

My sisters and I continue to return to Call-on Congress each year; we’re still determined to affect policy. We also realized during that first year that this would be a long hard-fought battle. The difference now is that we also return because of the bonds that have been formed with our new friends; it’s become like a family reunion each year. We embrace one another like favorite cousins, share laughter, and hold each other up during those inevitable times of loss.

Losing new friends to colorectal cancer is by far the toughest part of continued advocacy, but that same loss is also what keeps the fire lit.

As I reflect on the last ten years of advocacy, I realize that similar to life, it comes with changes; ups and downs, highs and lows. When my sisters and I began our advocacy, we did every single thing that we could to raise awareness about colorectal cancer throughout our community. We were so involved to the point that we were asked many times, “Are you sure you can do that too?” The answer was always, “Yes!” 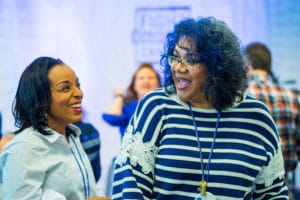 We were successful with bringing Fight CRC’s One Million Strong campaign to the west coast. Each one of us has served on Fight CRC’s Grassroots Action Committee (GAC), mentoring new advocates and planning Call-on Congress. This past Call-on Congress, we had the pleasure of bringing along our 13-year-old nephew; he’s been an “advocate in the making” since he was four and could not wait to attend. He’ll be back this year.

I’ve learned many life lessons throughout my advocacy journey. One unexpected lesson is the importance of self-care and continued personal growth; not only is it okay to take time to care for yourself, but it is also necessary.

Since my first Call-on Congress, I’ve experienced a lot of changes; some have been difficult, others have been fantastic. I’ve accomplished many personal goals in the last few years; I’m most proud of being in the best overall health of my entire life. 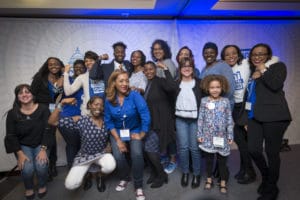 Advocacy has played a huge role in living my purpose and I couldn’t be more grateful. These days, my advocacy is just a little quieter. I don’t try to do everything all of the time. Currently, I serve on my employer’s volunteer committee and I never miss a chance to inject colorectal cancer awareness. I am a current member of the GAC, continuing to mentor new advocates and contributing behind the scene. Of course, my sisters and I sport Fight CRC gear so often that it’s been called our uniforms. It’s an easy way to continue the conversation about colorectal cancer.

Now, I represent the state of California when I attend Call-on Congress, and I am just as committed as I was during those very first meetings. Maybe not so emotional, but still full of passion and now leading with confidence. I recognize my role as a mentor and only hope that I continue to inspire advocacy.

15 thoughts on “Ten Years of Advocacy”