Share on Facebook Share on LinkedIn Share on Twitter Share via Email
Rangers third-base coach survived stage II colorectal cancer and is now encouraging others in the fight. SPRINGFIELD, MO. – Jan. 25, 2018 -- “See every obstacle as an opportunity in life.”  That’s just some of the advice packed into a new campaign by Fight Colorectal Cancer featuring Texas Rangers third-base coach Tony Beasley. Diagnosed with stage II colorectal cancer in 2015, Beasley is speaking out to encourage people to get screened and tell fellow survivors to stay positive through the fight. Beasley’s story is told in the latest issue of Beyond Blue, Fight CRC’s magazine, as well as a PSA that will be play on broadcast and social media channels throughout 2018.

“I wanted to share my experience in hopes to educate and inspire those who have reservations concerning addressing issues they are experiencing and also for those going through treatments,” said Beasley. “I want survivors to have hope that they can be victorious over whatever they are dealing with! Make the outcome you want a reality!" 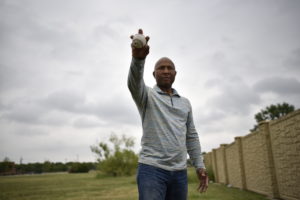 Beasley’s story starts out like many of the other one million survivors of the disease – no family history of colorectal cancer and a few nagging symptoms. He was extremely healthy, being an athlete his entire life, when he noticed unusual fatigue. A struggle with hemorrhoids led him to a gastroenterologist who encouraged him to do a colonoscopy. The procedure discovered a rectal tumor, with next steps being chemotherapy and surgery. But through it all, Beasley worked hand-in-hand with his doctors and stayed optimistic.

“I saw cancer as an opportunity and not an obstacle,” says Beasley. “I learned to not take anything for granted.”

His optimism got him through his treatment and onto a path of survival. Now in remission, he serves as an inspiration not only to the Rangers team and other baseball fans, but to a community of colorectal cancer survivors looking for inspirational stories, encouragement and sources of hope. 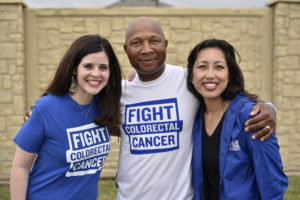 “Having had the chance to meet Tony, in short order, I realized that he was not only telling his story, he is a role model for our community,” said Anjee Davis, president of Fight CRC. “He is an example of someone that has fought through the worst days but has found a way to celebrate the simple successes and life moments. He is incredibly motivating and inspiring because he’s been there and continues be a fighter.”

To the community, Beasley offered these tips for staying positive through cancer: 1. Draw on your source of faith and belief. 2. Don’t allow negative thoughts to rule your mind. 3. Surround yourself with positive people! 4. Win small battles, win each day and try to maintain a sense of normalcy! 5. Fight with the outcome you want as the prize, don’t give in! 6. See every obstacle as an opportunity in life. 7. Ask questions. Be part of the process! To read Beasley’s story in Beyond Blue, download it for free at FightCRC.org/BeyondBlue. Here is the new PSA with his story: A shorter :30 PSA will also run on select broadcast channels throughout 2018.

About Colon and Rectal (Colorectal) Cancer

Colorectal cancer is the second-leading cause of cancer deaths in the U.S. among men and women combined. Each year, approximately 135,000 people are diagnosed and 50,000 people die from the disease. Colorectal cancer screening can save lives but only if people get tested. There are 23 million people in the U.S. who need to be screened. There are several recommended screening options, the best test is the one that gets done.

Fight Colorectal Cancer (Fight CRC) is a trusted national nonprofit advocacy organization fighting for a cure. It was founded in 2005 by Nancy Roach, a patient advocate who witnessed the need for colorectal cancer advocacy after her mother-in-law’s diagnosis. The organization plays an important role in rallying colorectal cancer advocates to action. Fight CRC is known for activism and patient empowerment throughout patient, academic, political, scientific, medical and nonprofit communities. With a mission focused on advocacy, research, patient education and awareness, the organization serves advocates in every state of the U.S. and many others around the world. Fight CRC is rated Platinum by nonprofit monitoring group GuideStar and a 4-star charity by Charity Navigator. To learn more, visit FightCRC.org