Share on Facebook Share on LinkedIn Share on Twitter Share via Email
The White House has issued an official press release that shares the national proclamation recognizing March as Colorectal Cancer Awareness Month. We received a presidential proclamation in 2014 for the first time since 2001 followed by proclamations in 2015 and 2016. On June 30, 2017, alongside 14 organizations, we wrote a letter to President Trump asking him to recognize March as Colorectal Cancer Awareness Month.

Fight CRC is thrilled to announce that the White House has joined over one million colorectal cancer survivors, fighters and family members in raising awareness about this cancer. In the press release they state:

Our Nation stands behind every American battling a diagnosis of colorectal cancer, and we thank the researchers, doctors, and other professionals who are working to improve the quality of life and outcomes for all cancer patients.  With each medical breakthrough and every new survivor, we are getting even closer to a future free from the fear and threat of cancer.

Advocacy works!  And we are making colorectal cancer a national priority!

“We are grateful the White House issued a proclamation designating March 2018 as Colorectal Cancer Awareness Month! It is critically important that our country's policy makers and leaders support and stand with us in shedding light on the second-leading cause of cancer deaths for men and women in America. We can't stop pushing for increased screening and funding for cancer research in our country,” said Anjee Davis, president of Fight CRC 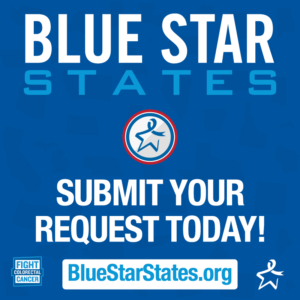 Look at those Blue Star States!

We’re also celebrating the dedication of 230+ advocates who are working hard to secure state proclamations. Our Blue Star States campaign pushes for March to be recognized as Colorectal Cancer Awareness Month at the state level EVERY YEAR. We've had advocates in every state involved in supporting this campaign who've asked their governors to issue a state proclamation.

“Thank you to the survivors, caregivers, family members and governors who are proclaiming March 2018 as Colorectal Cancer Awareness Month all across the country. Over 23 million people aged 50 years and older have not been screened. Blue Star States is an effort to work with governors and the White House each year to spotlight the advances that are being made, but also to encourage further support,” said Julienne Gede Edwards, Fight CRC Grassroots Advocacy Manager.

Join us all March in raising awareness!

We have many ways to raise awareness during Colorectal Cancer Awareness Month! If you haven't yet, sign the petition to show your support for colorectal cancer research. View our event calendar for a list of online and local events. And if you haven't yet, make a donation to keep our voices heard loud and clear!