Share on Facebook Share on LinkedIn Share on Twitter Share via Email
Before 1980, colorectal cancer death rates were actually higher for whites than African Americans. But, as rates began falling in the 1980's for both blacks and white patients, decreases for whites were substantially greater than those for blacks.  Between 1985 and 2008, mortality rates for whites with colorectal cancer fell 40 percent, while black rates declined by less than 20 percent. The decrease in black death rates was higher than those for whites at every stage at diagnosis, but strikingly different when cancer had spread to distant sites.   For whites whose colon or rectal cancer was first found at stage IV, death rates fell by more than 30 percent, while black rates declined by less than 5 percent. Over time, five year survival after regional and distant diagnoses grew for white patients but remained essentially unchanged for blacks. Anthony Robbins, MD, PhD and his team from the American Cancer Society analyzed information from the Surveillance, Epidemiology, and End Results (SEER) Program looking for changes in colorectal cancer mortality rates by race and stage at diagnosis from 1985 through 2008.  They found that 60 percent of the disparities between black and white rates were due to late stage diagnosis. They reported decreases in colorectal cancer death rates between 1985-1987 to 2006-2008 by stage:

Once cancer had spread regionally to lymph nodes or to distant organs, five year survival was lower in blacks than whites. Survival didn't change significantly over time for blacks over time for regional disease, although there was a small increase that began in 2002 for metastatic cancer. Percentage of patients living five years or more after diagnosis: 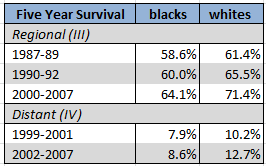 In discussing their observations, Dr. Robbins and his group looked for possible reasons for the disparities that continued even as death rates dropped and survival improved.  Among factors they considered were: Dr. Robbins and colleagues concluded,

In conclusion, colorectal cancer death rates have decreased for each stage of the disease in both whites and blacks since 1985, although for every stage, the decreases were smaller for blacks, especially for distant-stage disease. In the most recent time period, disparities in regional-stage and distant-stage mortality rates accounted for approximately 20% and 60% of the overall black-white disparity, respectively. Efforts to reverse the overall racial disparity in CRC mortality must target late-stage disease.

In an editorial accompanying the article, Electra Paskett, PhD, from the Ohio State University wrote,

In summary, disparities in colorectal cancer outcomes exist, and we know why. It is time to start addressing these disparities so that good health can be something everyone can experience.

What Can Advocates Do?

Patient advocates can play an important role in narrowing the gap in colorectal cancer death rates between blacks and whites in the United States. They can: