Cancer patients’ lives are full of ugly firsts. First oncologist. First mega-surgery. First needle of chemo. The list goes on. But I’ve had a few firsts recently that have even 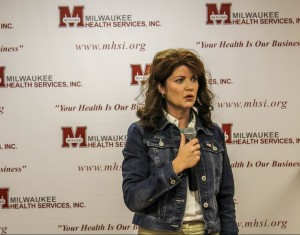 blown my own mother’s expectations…and I’m pretty sure she expected me to be the queen of the world. (Most moms dream big.)

First time greeting President Obama off Air Force One. First time ringing the Nasdaq closing bell. And first time sharing my colon cancer story in inner city Milwaukee as lieutenant governor.
A couple of weekends ago, I walked through a gauntlet of healthcare provider tables and cancer screening providers to a basement community room to talk about my own colorectal cancer diagnosis. My diagnosis came in the middle of my primary election campaign when I was running for lieutenant governor of Wisconsin. I was 35, had daughters ages 4 and 7 and was working the state nonstop in a race against five men.  Most of them had experience. I had never run for public office before but felt I had good enoug 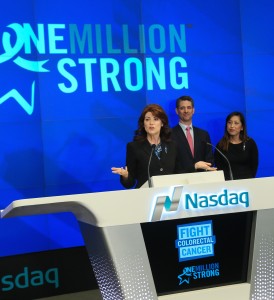 h ideas and perspective to offer something to my state.

But no amount of my great ideas and hard work would prevent my belly aches, back cramps and exhaustion. By the time doctors found my colon cancer, the tumor was the size of a grapefruit. It had already broken through my large intestine wall and was moving toward my liver. I was two weeks away from Election Day. Though I had genetic tests done, there was no time to get results back.

Within days I started bleeding and had to be taken for emergency surgery. When I got out, half my colon was gone…but so was the cancer. My recovery was slow. Time seemed to crawl as I anxiously watched the calendar, waiting for my gut to work well enough for my release from the hospital. Unfortunately, that didn’t happen on my timeline. On Election Day, I was still in the hospital. Having been removed from the campaign trail, and perhaps any hope of victory, I asked my doctor to release me. With my promise that I would return for treatment the next morning, he let me go just in time to get to the polls and vote. For myself. I beat all the guys by 21 points. 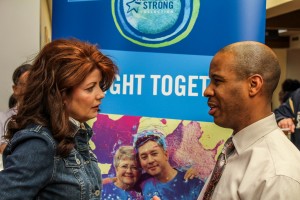 The next morning an x-ray revealed that my completely blocked gut had completely cleared overnight. I started chemotherapy two days after the general election. I lost about half my hair while radio hosts laughed about whether I wore an ugly wig or whether I intentionally styled my  hair badly. I began to drop cups of coffee as my neuropathy caused my fingers to lose sensation. I ducked into the ladies room at the Inaugural Ball so no one could see my face had frozen because of another chemo effect. I told people about these moments in the community room that day.

I also shared my story in NYC, with other survivors, doctors and developers of a noninvasive colon cancer test that has gotten so big it’s traded on Nasdaq. The company’s based in Wisconsin so I got to ring the closing bell! That same week, the governor was gone so I greeted the President when he came to Milwaukee. I had never done it before so I didn’t realize that you only have a second to talk to him. But that was just the first for this cancer survivor, the next time I’ll ask him if he’s gotten his colonoscopy.

That same week, the governor was gone so I greeted the President when he came to Milwaukee. I had never done it before so I didn’t realize that you only have a second to talk to him. But that was just the first for this cancer survivor, the next time I’ll ask him if he’s gotten his colonoscopy.

If you’ve been impacted by colorectal cancer, we need you! Join us and use your experience, your story and your voice to create real change. Get started by signing up. Next, see all the ways you can do something about this disease and take steps to get connected with our community. Come fight with us.