Ryan Shadle carries his dad's legacy, Paul Shadle, a 2018 Fight CRC ambassador and stage IV fighter. Paul was diagnosed in 2016 at age 44. Unfortunately, in February of 2021, Ryan and his family lost him to cancer. Paul was determined to make an impact by sharing his story and spreading the word about screening. Ryan continues to honor his dad through his work as an ambassador and screening champion.

“My father was the most brave and courageous warrior I have ever met. He never once complained about his fight, but instead, he took it head on every day. I want to carry on my father’s legacy as an ambassador. I know he would be so proud to see me working alongside Fight CRC to carry on his hard work of telling others to get screened.” 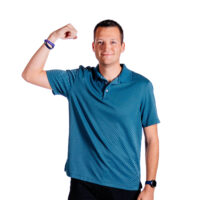